Emily Dickinson once wrote to Thomas Wentworth Higginson; "Candor--my Preceptor--is the only wile." This is the right way to put it.

In his Introduction to In the American Grain [1925], William Carlos Williams said he had tried to rename things seen. I regret the false configuration--under the old misappellation--of Emily Dickinson. But I love his book.

The ambiguous paths of kinship pull me in opposite ways at once.

As a poet I feel closer to Williams' writing about writing, even when he goes haywire in "Jacataqua," than I do to most critical studies of Dickinson's work by professional scholars. When Williams writes: "Never a woman, never a poet.... Never a poet saw sun here," I think that he says one thing and means another. A poet is never just a woman or a man. Every poet is salted with fire. A poet is a mirror, a transcriber. Here "we have salt in ourselves and peace one with the other."

When Thoreau wrote his Introduction to A Week on the Concord and Merrimack Rivers, he ended by remembering how he had often stood on the banks of the Musketaquid, or Grass-ground River English settlers had re-named Concord. The Concord's current followed the same law in a system of time and all that is known. He liked to watch this current that was for him an emblem of all progress. Weeds under the surface bent gently downstream shaken by watery wind. Chips, sticks, logs, and even tree stems drifted past. There came a day at the end of the summer or the beginning of autumn, when he resolved to launch a boat from shore and let the river carry him.

I am heading toward certain discoveries....

In the college library I use there are two writers whose work refuses to conform to the Anglo-American literary traditions these institutions perpetuate. Emily Dickinson and Gertrude Stein are clearly among the most innovative precursors of modernist poetry and prose, yet to this day canonical criticism from Harold Bloom to Hugh Kenner persists in dropping their names and ignoring their work. Why these two pathfinders were women, why American--are questions too often lost in the penchant for biographical detail that "lovingly" muffles their voices. One, a recluse, worked without encouragement or any real interest from her family and her peers. Her poems were unpublished in her lifetime. The other, an influential patron of the arts, eagerly courted publicity, thrived on company, and lived to enjoy her own literary celebrity. Dickinson and Stein meet each other along paths of the Self that begin and end in contradiction. This surface scission is deceptive. Writing was the world of each woman. In a world of exaltation of his imagination, feminine inscription seems single and sudden.

As poetry changes itself it changes the poet's life. Subversion at- tracted the two of them. By 1860 it was as impossible for Emily Dickinson simply to translate English poetic tradition as it was for Walt Whitman. In prose and in poetry she explored the implications of breaking the law just short of breaking off communication with a reader. Starting from scratch, she exploded habits of standard human intercourse in her letters, as she cut across the customary chronological linearity of poetry. Gertrude Stein (1874-1946), influenced by Cezanne, Picasso and Cubism, verbally elaborated on visual invention. She reached in words for new vision formed from the process of naming, as if a first woman were sounding, not describing, "space of time filled with moving." Repetition, surprise, alliteration, odd rhyme and rhythm, dislocation, deconstruction. To restore the original clarity of each word-skeleton both women lifted the load of European literary custom. Adopting old strategies, they reviewed and re-invented them.

Emily Dickinson and Gertrude Stein also conducted a skillful and ironic investigation of patriarchal authority over literary history. Who polices questions of grammar, parts of speech, connection, and connotation? Whose order is shut inside the structure of a sentence? What inner articulation releases the coils and complications of Saying's assertion? In very different ways the countermovement of these two women's work penetrates to the indefinite limits of written communication.

Emily Dickinson took the scraps from the separate "higher" female education many bright women of her time were increasingly resenting, combined them with voracious and "unladylike" outside reading, and used the combination. She built a new poetic form from her fractured sense of being eternally on inteIlectual borders, where confident masculine voices buzzed an alluring and inaccessible discourse, backward through history into aboriginal anagogy. Pulling pieces of geometry, geology, alchemy, philosophy, politics, biography, biology, mythology, and philology from alien territory, a "sheltered" woman audaciously invented a new grammar grounded in humility and hesitation. HESITATE from the Latin, meaning to stick. Stammer. To hold back in doubt, have difficulty speaking. "He may pause but he must not hesitate"-Ruskin. Hesitation circled back and surrounded everyone in that confident age of aggressive industrial expansion and brutal Empire building. Hesitation and Separation. The Civil War had split American in two. He might pause, She hesitated. Sexual, racial, and geographical separation are at the heart of Definition. 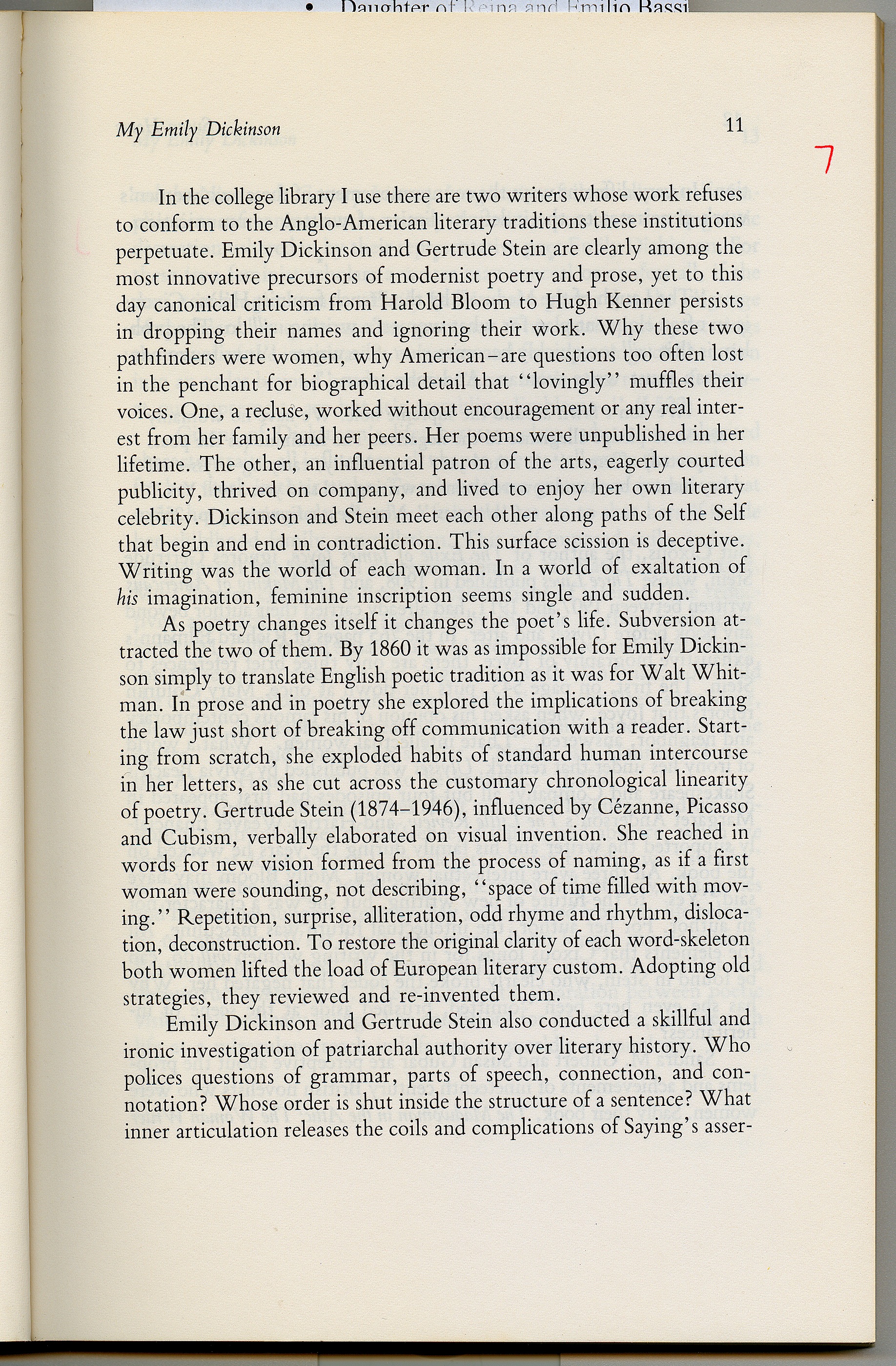 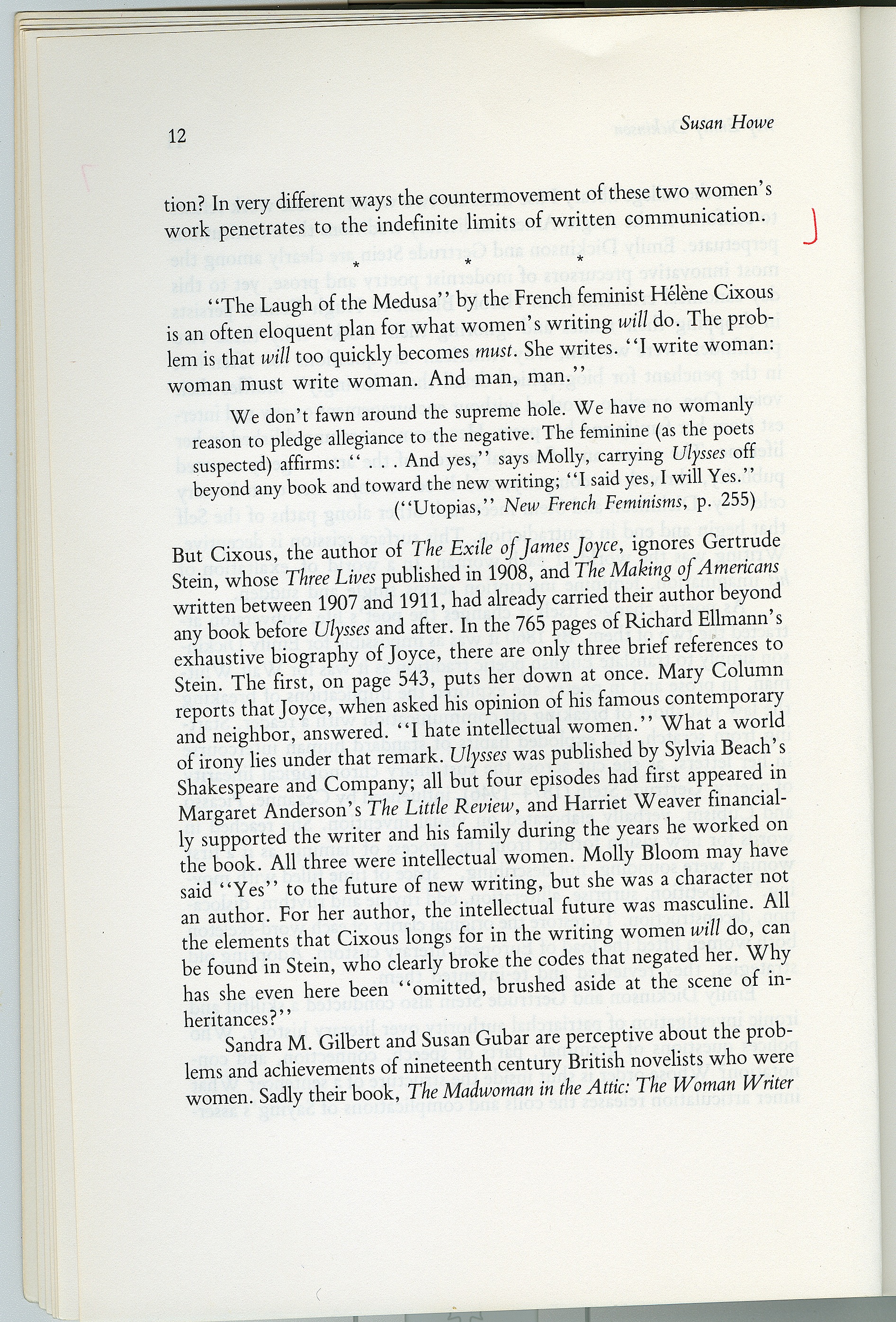 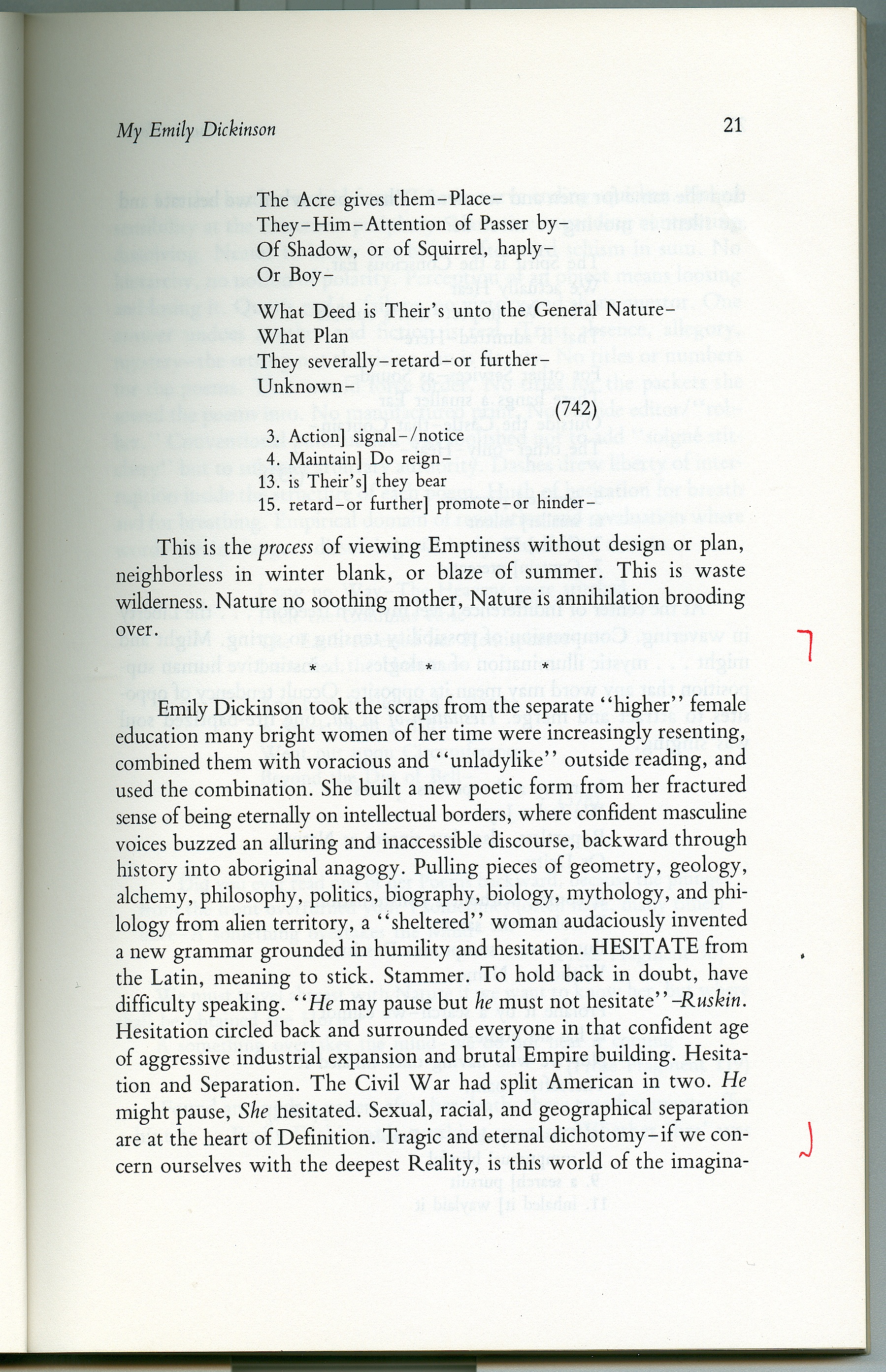 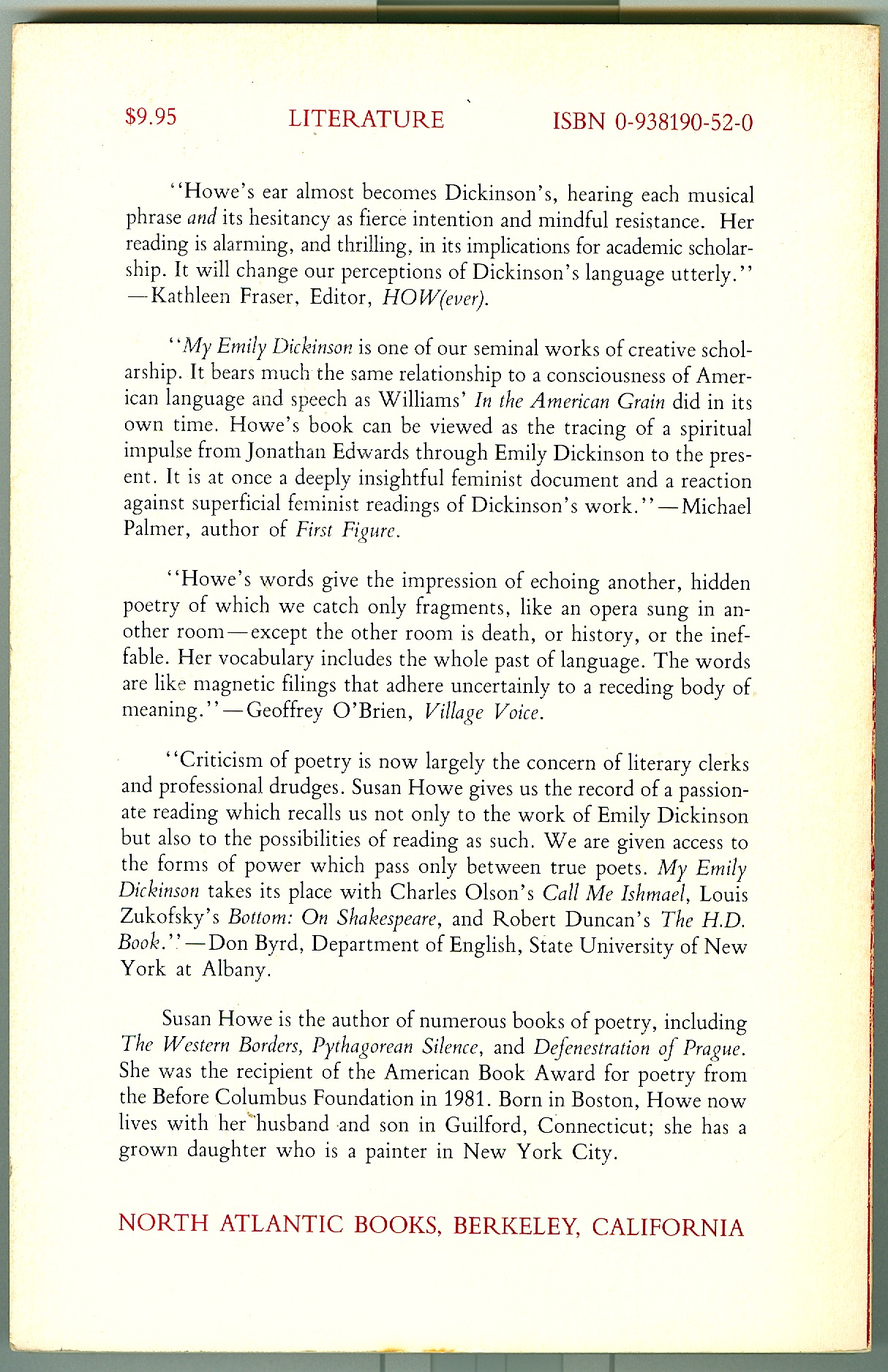